You can see all the lectionary readings for the Proper 11, Year C by clicking here. I have chosen to discuss the passage from the book of Luke.

In this passage, Jesus is staying in the home of Martha and Mary. Martha is busy taking care of everything–fussing around the house (oh sometimes I am such a Martha myself–I do like to fuss around and check off my to-do list, though I’m probably less efficient). Meanwhile Mary is sitting at Jesus’ feet and listening to him teach.

Martha got fed up (I can really relate to this, too) and complained that she was doing all the work while Mary sat there. She told Jesus to make her help out. Can you imagine the audacity?

Jesus tells her she’s worried about too many things, but Mary has made the right choice in what is important.

This is such a hard teaching for me. If women still often have the onus of the housework even today, imagine how much more was on them back in that day. And stuff does have to get done. Every day I have stuff I have to get done–in my case it’s usually my mother stuff that I have to do. Not only do I have the usual mom duties, but oen of my kids has a syndrome and more needs than the usual kid stuff. He gets medications four times a day, for instance. I have to get stuff done or the consequences could be very bad. But even so, how often do I fuss around getting less necessary stuff done, when I could be focused on the spiritual or even on the loving part of mothering rather than the fussing part? So often.

So I can see the story that way–an indictment of my Martha side. But I can also examine something else that is happening here. Martha is embracing the cultural norms of the day–women doing the housework while the men sit and talk. Mary is being more like the male disciples we usually hear about–learning from a great teacher. And Jesus doesn’t rebuke her for that choice but instead celebrates it. Often growing up it seemed like the church was all about patriarchy–women had their place and it was in subjection to men. But Jesus didn’t often promote that. He was radical in lifting up women in so many ways.

Yes, I can be convicted as someone who spends far too much time fussing with my to do list rather than dwelling in the presence of Christ, but I can also feel the liberation of a Christ who lifts us up in love and equality.

You can see all the lectionary readings for the Fifth Sunday in Lent, Year C by clicking here. I have chosen to discuss the passage from the Gospel of John.

Jesus goes to visit his friends in Bethany, Martha, Mary, and their brother Lazarus. During dinner as Martha serves and Lazarus eats with Jesus, Mary comes in with expensive perfume. She pours the perfumeon Jesus’ feet and wipes his feet with her hair.

Judas (yeah, that one) complained that the perfume was worth a full year’s pay–saying that it should have been sold and the money given to the poor. The text then notes that Judas didn’t really care about the poor, but cared because he was a thief. He took care of the money for Jesus’ followers and stole from it.

Jesus answers that she has saved this perfume to prepare him for burial. He says, “You will always have those who are poor with you. But you will not always have me.”

Sometimes expressions of love can be embarrassing and extreme. Sometimes like Judas we want to turn away and disdain generous displays of love. Obviously, Jesus cares for the poor–that’s evident throughout his ministry. But at this moment a display of love and caring is appropriate and welcome. He had come to this family before and been a blessing to them. Now he has come in the need to be blessed before he goes to Jerusalem, where he will be sentenced to die.

Love generously. Love Jesus extremely while you also love those in need.

You can see all the lectionary readings for the Second Sunday after the Epiphany, Year C by clicking here. I have chosen to discuss the passage from the Gospel of John.

Jesus and his followers are at a wedding in the town of Cana in Galilee. His mother is also there, so maybe it’s a family friend. They ran out of wine and Mary hustles over to Jesus to tell him. He asks why he’s telling him; he says it’s not time to begin his work.

Like so many moms, she apparently ignores his resistance (hey, I’ve done it with my kids). Also, how lucky are these people to have Jesus around when it was their poor planning that led to a lack of party wine? She tells the servants to do what he says.

Jesus tells the servants to fill some nearby jugs with water and then tells them to take some of the water out and bring it to the man in charge of the feast.

When the man tastes it, the water has become wine, and very good wine at that, because he compliments the bridegroom on saving the best wine for last instead of using cheap stuff on guests who are already drunk.

I kind of love that Jesus’ first public miracle was to make a party more fun. We should remember that when people act like Christians should be serious and dour all the time. We are allowed to celebrate and enjoy life. Jesus is often described as socializing with all kinds of people.

The miracles were also lessons for us–revealing something about the character and desires of God. In this case, God desires that we be joyful, in addition to the things we usually think about him desiring (that we do good, that we conversely not do harm, that we help the poor and seek justice). As Jesus says another time, he came that we might have life, and that we might have abundantly. (John 10:10)

Are you living an abundant life? Are there changes you might need to make to have a more joyful and abundant life? For instance, I recently deleted the Facebook and Twitter apps from my phone. I found that they were sucking up too much of my time, and often not making me feel better about myself or the world afterward. I feel I have a more abundant life when I can focus on other things. That is maybe not what you need to do, but just an example of what I’ve seen in my own life.

You can see all the lectionary readings for the Fourth Sunday of Advent, Year C by clicking here. I have chosen to discuss the passage from the Gospel of Luke.

Mary travels to another town to visit her cousin Elizabeth. Elizabeth feels her unborn baby leap up inside her at Mary’s voice and she is filled with the Holy Spirit.

She proclaims to Mary that she is blessed more than any other woman and that God has blessed her baby. She tells Mary that her baby jumped for joy at the sound of Mary’s voice. She says, “Great blessings are yours because you believed what the Lord said to you! You believed this would happen.”

This is Mary’s response–her Magnificat (song of praise.

“I praise the Lord with all my heart.
I am very happy because God is my Savior.
I am not important,
but he has shown his care for me, his lowly servant.
From now until the end of time,
people will remember how much God blessed me.
Yes, the Powerful One has done great things for me.
His name is very holy.
He always gives mercy
to those who worship him.
He reached out his arm and showed his power.
He scattered those who are proud and think great things about themselves.
He brought down rulers from their thrones
and raised up the humble people.
He filled the hungry with good things,
but he sent the rich away with nothing.
God has helped Israel—the people he chose to serve him.
He did not forget his promise to give us his mercy.
He has done what he promised to our ancestors,
to Abraham and his children forever.”

Mary has obviously come to terms with the big news the angel Gabriel brought her. She is young and inexperienced; she has every reason to be terrified, but she is full of hope and trust that God knows what he is doing. She knows she is blessed and she celebrates the blessing and the hope that comes with it. 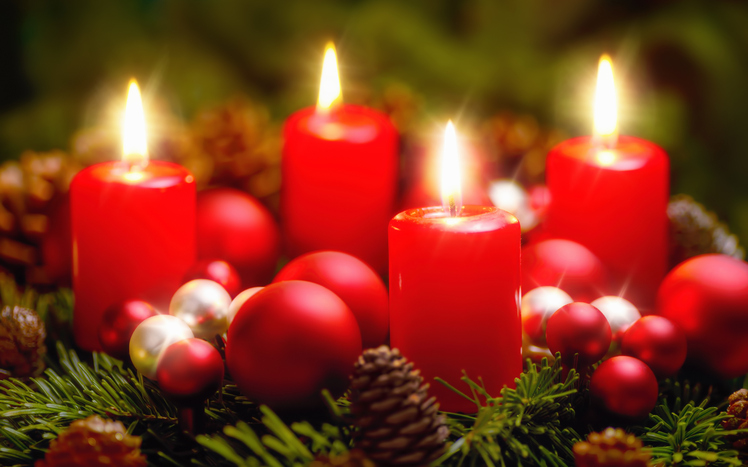 You can see all the lectionary readings for the Fourth Sunday of Advent, Year B by clicking here. I have chosen to discuss the passage from the Gospel of Luke.

Today’s Advent reading is the very start of the Christmas story–the angel Gabriel comes to young Mary in Nazareth. Gabriel tells Mary she is very special to God. She is surprised and confused. I mean, who wouldn’t be?

The angel tells her not to be afraid, because God is pleased with you. He tells her she will be pregnant and have a baby boy, whom she will name Jesus. I love this part because my middle son has played Gabriel twice in our church’s Christmas pageant, and he does an almost British accent and rolls the R when he says grandly, “He will be grrrrreat and will be called the Son of the Most High; and of his kingdom there will be no end!”

Mary asks how it will happen since she is still a virgin and the angel tells her the power of God will cover her. The baby will be called the Son of God. He also tells her that her cousin Elizabeth, considered too old to bear a child, is also pregnant, because God can do anything.

Mary says, “I am the Lord’s servant. Let this thing you have said happen to me!” Then Gabriel leaves her.

I love this story. It’s supernatural but also very human. A young woman having an out-of-this-world experience. She’s shocked but she’s also accepting. I hope that in every encounter with God we can also be so willing to be servants. Cherish the mystery but be willing to say yes to it, too.

You can see all the lectionary readings for the Fifth Sunday of Lent, Year A by clicking here. I have chosen to discuss only the Gospel reading.

The first part of the story is a little puzzling. Jesus receives a message from Lazarus’ sisters, Martha and Mary, telling him his beloved friend is ill. Jesus hears it and said, “This illness does not lead to death; rather it is for God’s glory, so that the Son of God may be glorified through it.”  END_OF_DOCUMENT_TOKEN_TO_BE_REPLACED